GO machines - they are at every metro station and largest bus and tram stops. However there are stories of people furiously trying to operate them without success. Although there is an option to switch to English language, the controls are specific (a wheel that you spin) and the card reader is only in french and using abbreviations. That can be problematic.

"Kiosk" or "Bootik" ticket offices are located in the largest metro stations. Some of the staff understands English and generally wants to help you. But take into consideration that these Brussels public transport ticket offices are open only during the busy hours. Each has different opening hours depending on the size of the station.

Newspaper shops and supermarkets - many sell Brussels public transport tickets but you have to know where to find them and when there, you have to know what you want. Don't expect to have lenghtly conversation explaining the options to you.

The Brussels Card - If you plan to also visit some museums this is a good option. You get the public transport pass and also free entry to museums. Also many discounts on attractions, bars, restaurants...

Inner-city Brussels public transport uses unified ticketing system so you can use the same ticket for bus, metro, tram or a combination.

The simplest way is to buy a single-fare ticket as you enter the vehicle. This costs €2,50. But this is somewhat of an emergency way of buying Brussels public transport tickets. There are cheaper and easier options.

So-called contactless tickets are paper magnetic tickets that can be bought at the places above. 1-hour ticket costs €2.10 and 24-hour time ticket costs €7.50. You must validate these by using the machine inside the vehicle.

You can also buy a MOBIB card, load it with 'tickets' and then use it inside the vehicle. It costs €5 and can be bought at the ticketing office. You can load the MOBIB card even at the GO machines. 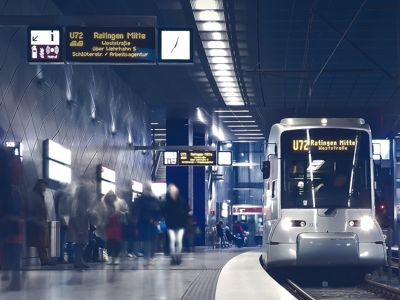 There are 4 metro lines that service the Brussels city centre. Brussels metro runs frequently: every 3 minutes at peak, every 10 minutes after 8pm, every 5 minutes on weekends.

Doors to metro trains and trams do not open automatically, so be sure to pull the leaver or press the button on the door before you miss your stop. Validate your tickets at the little machines before hopping on the metro or you may be fined.

To orientate yourself at metro stations look for the info symbol when you arrive and there will be a map of the street above for you to determine which exit to take. These maps can also be seen at tram and bus stops and are very useful. There are vending machines for drinks, snacks and prepaid mobile recharge at almost every metro station and platform.

Buses are convenient if your departure point or destination is not close to a metro station. Timetables are available at each bus stop and also online but they do not run as frequently as the metro so it pays to check the timetable before waiting at the bus stop. Tickets can be purchased from the driver at €2.50 for a 1 hour ticket, which can be used on the metro and trams as well.

Trams are similar to the bus and metro except they are slightly slower than the metro and slightly more frequent than the bus. It will depend on your route whether you should take a tram, a bus or metro to your destination. Arrival times, departure times and stops are shown at each tram stop. There are also convenient street maps at each stop. Tram lines run along the street and sometimes on the same line as cars because there isn't a lot of space on some narrow streets. So watch out for cars as well as trams when crossing the road. 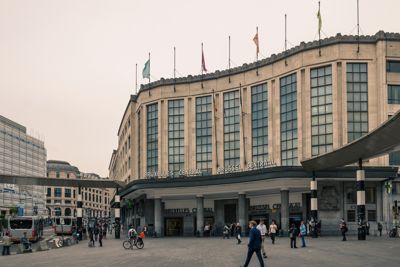 The intercity train system is very convenient for making day trips from Brussels to the other major cities in Belgium. Trains run frequently throughout the day (at least 1 train per hour) and tickets can be purchased at any railway station (marked with a B with a circle). All tickets have open time schedules so you can board at any time during the day. Tickets are stamped on the train after you have boarded. To check out how long it takes to go from one city to another see Travel to Brussels.