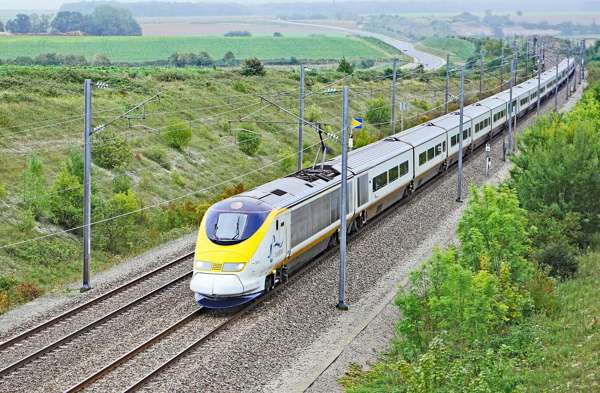 Travelling by train from Paris to Brussels and back is even more comfortable than taking a flight between these two major cities. There is no need to stand in line and go through security or check your suitcases in before departure. But you should still reserve your seat in advance. More on that below.

These are the three major high speed rail networks crossing between France, Belgium, United Kingdom and other nearby European countries. These brands can be easily confused so ensure you take the correct train from Paris to Brussels and be familiar with each of their destinations.

In fact TGV stands for "train á grande vitesse" (high-speed train) in French. It is a type of train as well as a rail brand. Thalys and Eurostar are types of TGVs too.

TGV is a brand of French trains connecting France to many large European cities. If you decide to land in Paris Charles de Gaulle airport, you can take the TGV from CDG airport to Brussels. However if you are already in Paris, you must take the Thalys train to Brussels.

The Eurostar has major stops in Paris, Brussels and London. Since the United Kingdom is not part of the Schengen shared border zone, you always have to check-in 20 minutes before your Eurostar train leaves when you go to London.

It pays to book in advance for each of these high-speed rail services because just like flight tickets, they get more expensive closer to the date of departure. Each company has its own website where travellers can book their tickets online in advance with several ways to receive the tickets (pick-up at the station, home-print or by post). Payment is normally accepted via credit card or bank card. A second class train to Paris or from Paris is between €25 to €90. Eurostar tickets can be even more expensive.

Rail pass holders, with companies such as Eurail, remember you still need to pay a supplement to take the high speed trains. Go to the ticket counter first before jumping on the train or you will not find a seat and you may still need to pay on board.

Brussels is not a very large city. However it is quite busy and has three train stations. It is recommended to get familiar with them. And also with their multilingual names since Brussels is a city with two official languages and markings are in both.