Taking a train from other parts of Europe or Belgium to Brussels is very easy because of the frequency and large number of departing cities that have trains going via Brussels other major cities or directly to Brussels. There are three types of trains: domestic trains, intercity trains and high-speed trains all operated by several different companies. On trains that require no seat reservation passengers have to be prepared to stand for the entire journey if there no seats.
Belgian railways: www.b-rail.be 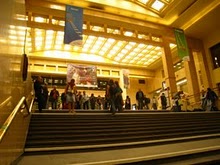 Brussels Thalys
Thalys runs a high-speed train service that connects major European destinations Paris, Brussels, Amsterdam and Cologne. The only train from Paris to Brussels is operated by Thalys and from Berlin to Brussels, travellers need to transit via Cologne to reach Brussels. All trains arrive at Brussels-Midi station. Seats need to be reserved in advance. There are two classes: first and second. Refreshments are served on first class. There are no customs but arrive at least 15 minutes before departure.
www.thalys.com

Ghent to Brussels
Daily trains operated by SNCB take travellers from Ghent (Gent) Sint Pieters station to Brussels-Midi it takes 30 minutes. There are trains every hour during the day. Tickets can be purchased at the station without seat reservation.

Bruges to Brussels
From the northern city of Bruges there are daily trains by SNCB. From Bruges (Brugge) train station to Brussels-Midi it takes 1 hour. Trains depart once every hour during the day. Tickets can be purchased at the station without seat reservation.

Liege to Brussels
From the southern Belgian city of Liege there are daily trains by SNCB. Liege Guillemins station is 1 hour to Brussels-Midi. There are 2-3 trains every hour during the day. Tickets can be purchased at the station without seat reservation.

London to Brussels
The Eurostar arrives directly from London St Pancras International to Brussels-Midi station. Travel time is 1 hour. All seats are reserved in advance. There are customs when departing from London, ensure you arrive early before departure and have your passport ready.